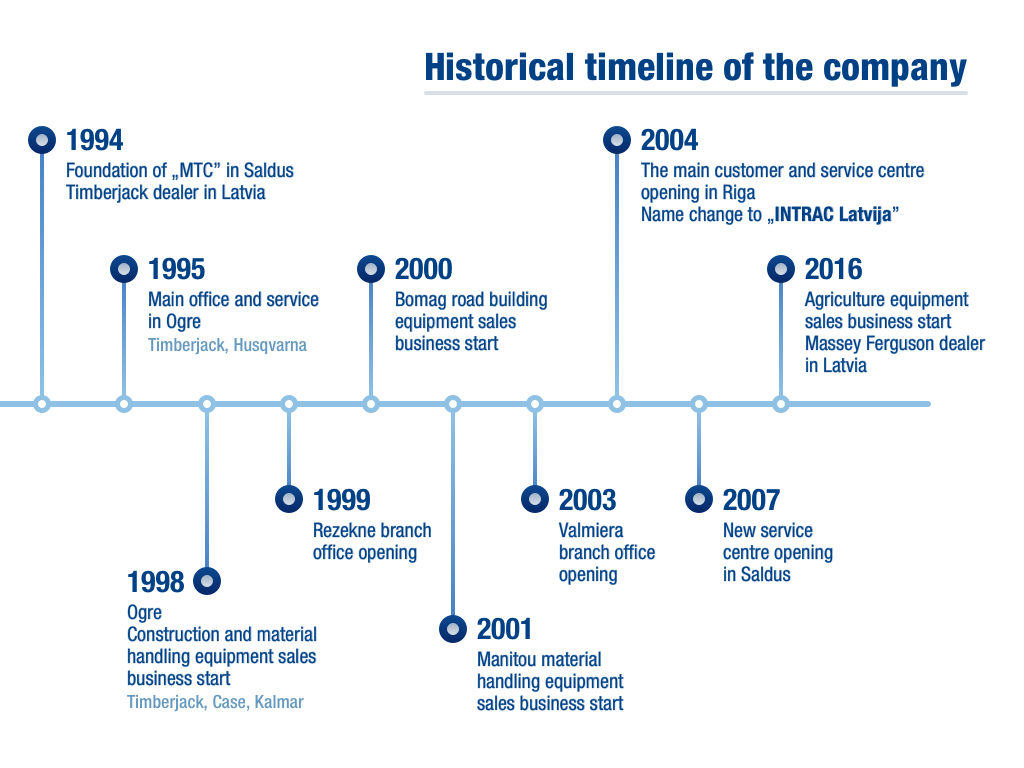 History of the company

SIA Intrac Latvija, which until the beginning of 2005 was known under the name of MTC, is a company of the INTRAC group. The company was established in Saldus on 14 November 1994 as the official dealer for Timberjack in Latvia. The new company chose its basic location in the mechanical workshops of the former Saldus Agriculture company, the premises of which were privatised by the company SIA Silva. The initial specialisation of company MTC was servicing of forestry machinery of the company SIA Silva. At that time in Saldus there was servicing space enough in order to perform machinery maintenance in good quality. In autumn 1995 the management of the company moved the central office to Ogre, which is a city in Latvia historically known as a forestry centre, but in Saldus a local office was established. Company MTC started its operation in Ogre in an office the size of which was 400 square metres, in a separate spare parts warehouse and three servicing compartments. In these premises that we rented from Ogre Road Department we invested a lot of capital repairing and equipping it. Meanwhile next to products of Timberjack we started to offer our Latvian clients production of the company Husqvarna. We organised various seminars and practical shows where we demonstrated the possibilities and quality of these products. During the ten years company continuously developed and strengthened. In 2004 the turnover reached 11 million lats. Also the local offices developed well, among them in one of the largest cities of Latgale Region Rezekne. In June 2003 we opened a local office in Valmiera. The opening part was visited by the city top officials and also a number of our customers were present, because this office, sales and servicing centre was particularly established to satisfy their needs and make their servicing more comfortable. Upon the moment of opening the local office MTC already had wide and stable range of clients in Vidzeme Region. In January 1998 when we already successfully operated in delivering of forestry machinery and together with the change of Husqvarna manufacture policy we also reacted by changing our working profile and starting to offer sale and post-sale maintenance of also construction and loading machinery next to the forestry machinery. In status of suppliers of construction machinery we selected the sector leader company CASE and the world-famous manufacturer of loading equipment company Kalmar. At this point the change of our strategy was completed. Since that moment we became the sale and service centre of forestry, construction and loading machinery. The new structure was efficient and the main benefit was the common service for all three machinery types, which is operating successfully still today. In spring of 2004 the central office was moved from the former site in Ogre to the newly-built customer service centre in Riga at 458 Maskavas Street. The total area of the new customer service centre is 3000 square metres and we invested one million lats in the construction of the centre. This is the most advanced sale and service centre in the Baltic States and one of the best across the Europe. In the beginning of 2004 a decision was taken to change the name of the company MTC, which was grounded by the idea of establishing one single brand for all Thomesto Group companies in the Baltics. The creation of the new name and logo was a long and creative process, which was carried out in co-operation with the Canadian Baltic branding company Ticon. Different variants of names were analysed, we also interviewed our clients and employees regarding the proposed samples and it all resulted with the establishment of name INTRAC, which became the new corporate name of the group. Name INTRAC was chosen, because it is short, it can be easily pronounced and has some association with tractor machinery.

Owners of the company

Since the establishment of the company until 2002 INTRAC (previously Thomesto Machine Agencie ASB) Group was part of the Finnish trade concern Thomesto Oy. During 2002 the group management together with the Baltic Investment Fund undertook a management buy-out. The company has been active with heavy machine trade in the Baltics since the 1970'ies. In 1994 subsidiaries were founded in the Baltic countries as a way to improve service and support for the company's customers. In 1995 the parent company was established to develop and co-ordinate the marketing and sales of heavy machinery in the Baltics. INTRAC Group AB (www.intrac.se) has headquarters in Stockholm, and subsidiaries in all three Baltic countries. Owners of the INTRAC Group AB are the Baltic Investment Fund, Nalka Invest and the management of the INTRAC Group.